What is something that continues to hurt both independent pharmacies and patients? 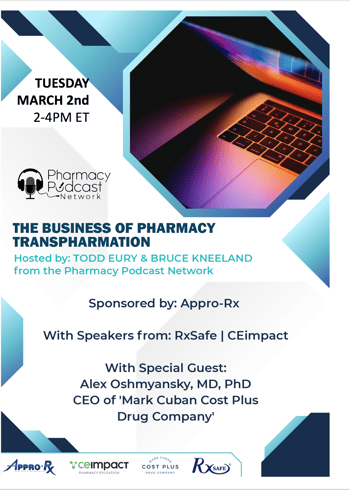 For years, drug manufacturers, wholesalers and other middlemen have been inflating the cost of drugs to increase their return. Add PBMs into the mix, and many independent pharmacy owners are losing money when they fill prescriptions, due to punitive measures such as DIR fees and clawbacks to already low pharmacy reimbursements.

In January, a new drug manufacturer/distributor entered the market. Traditionally, pharmacies work with middlemen when purchasing medications, but now Mark Cuban Cost Plus Drug Company is pledging to work directly with pharmacies.

This new model could change the way independent pharmacies acquire their medications, and ultimately impact their bottom line.

What is Cost Plus Drug Company?

Mark Cuban, an American entrepreneur best known for his role in the show Shark Tank, recognized the need for affordability and transparency when it comes to prescription drugs. Mark Cuban Cost Plus Drug Company was created with the goal of ensuring that all patients are able to afford their medications, know what it cost to make their medications, and feel the price that they paid for their medicine was fair.

The generic drug company promises drug transparency. Both patients and pharmacies will be able to purchase medications from Cost Plus directly, cutting out the middleman.

On the company’s website, it states that each drug will only have a 15% markup, to ensure that the company remains profitable and functional.  There are no additional hidden costs, which means that everyone gets the same price for every drug that Cost Plus manufactures.

So, what does this mean for independent pharmacy?

Find out everything you need to know in the new webinar: “The Business of Pharmacy Transpharmation” hosted by Todd Eury, publisher of the Pharmacy Podcast Network. The webinar will feature a Q&A with Alex Oshmyansky, MD, PhD, CEO & Founder of the Mark Cuban Cost Plus Drug Company. To register, click here.