The RxSafe RxASP secure packaging system helps pharmacies by addressing some of the drawbacks of existing packaging technology while also helping to improve patient adherence and have patient outcomes, increase revenue growth and to expand the pharmacy's geographic region and customer base. This system is small enough to fit into your existing space, comes with custom labeling options and has universal cassettes to avoid the tree-hanging issues that happen with existing machines. The RxASP solution for independent pharmacies offers systems that work for them with their patients' strip packaging adherence. Ben McNabb, the owner of the independent Love Oak Pharmacy, has helped to transform his business by implementing the RxSafe RxASP system, leading to a 24 percent increase in revenues in a single year.

The Love Oak Pharmacy was an early adopter of the RxASP. Owner 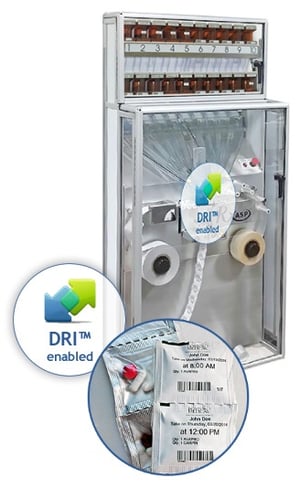 Ben McNabb began working at the pharmacy when he was 16, which helped to convince him that he wanted to become a pharmacist. After he graduated from pharmacy school, he learned that the Love Oak Pharmacy's owner was retiring, and McNabb was able to purchase the pharmacy two years ago. When he first took over the business , he was very interested in adding good adherence packaging to the pharmacy's service offerings as a no-cost added benefit for his customers.

McNabb states that today's healthcare system is in flux, and pharmacy owners need to understand that drastic changes also offer significant opportunities. He states that as Medicaid, Medicare and the insurance system move towards implementing outcome-based reimbursements, pharmacists need to be able to engage their patients on a deeper level. McNabb believes that a primary advantage of offering adherence packaging to Love Oak's customers is that the patients enjoy better outcomes while the pharmacy enjoys stronger performance so that it maximizes its reimbursements. McNabb says that the RxASP has helped his pharmacy to become more efficient while also being a powerful draw for attracting new customers.

Increasing customer base and geographic region

According to McNabb, the improved ability to synchronize and to be organized has driven the Love Oak Pharmacy's revenues and helped to increase its customer base. He states that many home health agencies are not being reimbursed for the time they spend filling at-home medicine organizers and are looking for solutions. By offering the RxASP adherence strip packaging as a free service, the patients receive their medications already organized for them at the beginning of each month, which is invaluable for them. Multiple home health agencies have switched their business to the Love Oak Pharmacy because of the packaging services offered by it. McNabb says that the pharmacy's revenue growth speaks volumes for the importance of the system. In May 2017, the Love Oak Pharmacy enjoyed revenues of $520,000, which was a 24 percent year-over-year increase from the $420,000 the company brought in in May of 2016. He attributes a significant portion of this growth to adding the RxASP packaging system to his pharmacy. McNabb says the system helps from a customer service perspective because it is a tangible product that helps to attract new customers and to keep them.

Because the RxASP's adherence strip packaging requires a visual for patients to understand, McNabb acquired custom printed boxes that the Love Oak Pharmacy could put its strict packaging in. He then made a short video that he was able to target to his region using advertisements on Facebook.

As more and more people in his city and area saw the video, it received many likes and shares. The ad's demonstration of the RxASP's adherence packaging as implemented by the Love Oak Pharmacy caught the attention of the local news station, which did a profile of it as a news item, showing an even wider audience of potential customers how the packaging can help people to remember to take their medications and to know which to take at the right times. This led to increased interest and later even caught the attention of the larger Dallas television stations and its market. Love Oak now has a larger customer base and an expanded geographic coverage region with a few customers located as much as 100 miles away through home health agencies.

Why he chose the RxASP over competing products

McNabb says that he chose the Rx ASP 20 over competing products because of its scalability. He said that it has an additional unit and more drug retrieval options that can be added as your pharmacy grows. McNabb said that the system had a lower start-up cost as compared to other systems. The universal cassettes also helped his decision because they mean there is no user error caused by technicians spilling trays. The packaging has thermal paper, which makes the labels easier to read by people who have poor vision. He also liked the ability to put more pills in per packet because of the ability to adjust the length of the packaging and said that waste is reduced.

McNabb says that the RxASP's adherence packaging has been life-changing for his patients who have to take multiple medications each day. He has found that patient adherence has improved. One patient of the pharmacy who has signs of dementia was only around 30 to 40 percent compliant with his prior pharmacy. McNabb said Love Oak Pharmacy was able to help the man get to 100 percent compliance with its packaging system and to improve his outcomes.

McNabb says that adherence packaging is the future of the independent pharmacy business and that pushing towards greater adherence through packaging is important. His business has grown significantly in the year since his pharmacy added the system, and his patients have enjoyed the ability to manage their chronic conditions and adhere to their prescriptions better with the packaging that he is able to offer.