Now is the time of year when people start thinking about how to wrap up their tax year in the best way possible. End-of-year tax planning is key to this process.

In a recent webinar, we delved deeper into the specifics of Section 179 with pharmacy tax accounting experts Scotty Sykes and Bonnie Bond from Sykes & Company, and 2022 NCPA Willard B. Simmons Independent Pharmacist of the Year winner, Ken Thai. Todd Eury of the Pharmacy Podcast Network moderated the event.

Here are some highlights from the webinar.

Scotty Sykes: So, Section 179, the short of it is, if you buy a piece of equipment or technology, that's considered a capital asset, generally that capital asset goes on your balance sheet as an asset. The IRS will allow you to write that asset off over a period of time. So, it can be three years, five years, fifteen years. If it's a building, thirty-nine years. What Section 179 does is it allows you, the pharmacy owner, to write off that equipment one hundred percent in the year it is put into use.

It's designed to encourage investment in technology, encourage investment in equipment to get that write-off in the current year versus spreading it out over several years. So, 179 is a very powerful tool from a tax planning perspective. What doesn't get as much attention is the bonus depreciation. Section 168 K, which is very similar to Section 179. There are some differences, but both of those essentially allow one hundred percent write-off.

Todd Eury: For example, a community pharmacy purchased or financed one hundred and sixty-five thousand dollars' worth of a RapidPakRx in 2022. So, to use that as a scenario, I'm a brand-new pharmacy owner. I bought this equipment. Bonnie, take me down the path with that...

Click on the image above to watch the whole webinar.

Bonnie Bond: So, maybe let's just pretend that you have $165,000 in projected income for the year, to make the math easy for all of us. You could essentially purchase a piece of equipment. So in in this example, it's $165,000 and we have the ability to go ahead and write that off. Scotty mentioned in this first year, if it's put in service before the end of the year, and you did that immediately, that would bring your taxable income down to zero.

One thing to note and what we love about it, you know, many people ask us. "Well, what's the difference? If it's going to be the same amount of depreciation if I do it over five years, seven years?" And that's correct. It is the same amount of money. But what we're looking at, especially in the pharmacy, is the benefit of increasing cash flow.

Cash is king: having as much cash flow as you can available for your pharmacy to do what you need to do in your store. So, accelerating that depreciation, not paying tax on that money in that first year, is key.

One of the first things that we want to make sure people understand, especially when you look at a large robot purchase, let's say when we see it, it has to be in service before the end of the year. It has to be in your store. You're able to fill one script with it.

And in a robot example, you should be in good shape in that scenario, but just merely maybe place an order. If it's not there by 12/31, you're not going be able to take advantage of this depreciation that we're talking about.

So just keep that in, mind. You don't have to have paid for it. Maybe you just place the order. It's there, and it's in service. You haven't even made a payment on it yet. [The IRS] will still take that deduction. But it's just got to be in service.

Scotty Sykes: I get a lot of questions on what kind of tax savings they get if they buy this robot, I always tell folks to find that bracket you're going to fall in. And then usually a lot of pharmacies are in that top bracket. And federal and state, maybe around 40 percent. So, if you buy a hundred-thousand-dollar robot, you're looking at $40,000 of tax savings. That's kind of the rough way of doing that.

Todd Eury: So, Ken, what was that first year that you started utilizing the Section 179 tax savings? Can you go into that for our pharmacy owner-listeners?

"Being new to the business world back then, I was shocked that something like this existed. If I made $100,000, I could buy a fifty-thousand-dollar piece of equipment and essentially write-off half of my income and pay half the taxes!" - Ken Thai, PharmD

Ken Thai: I started my business about 17 years ago, and I would say that probably within the first two or three years, we already bought our first couple of pieces of equipment, and then ultimately it just kept on going and escalating from there. And of course, being new to the business world back then, I was shocked that something like this existed. If I made $100,000, I could buy a fifty-thousand-dollar piece of equipment and essentially write-off half of my income and pay half the taxes! It was something that I didn't even know was available because you don't think about these types of things until you go into business and your accountant starts telling you, "Hey, there are opportunities there, if you're really growing the business."

And more important than the savings is also featuring technology that can help you improve operations, efficiency, and the ability to improve the business as a whole. I think that probably is more important than even the tax savings, as far as I'm concerned, because ultimately, you know, the equipment that we use, they are able to quite honestly change the dynamics of the operation. 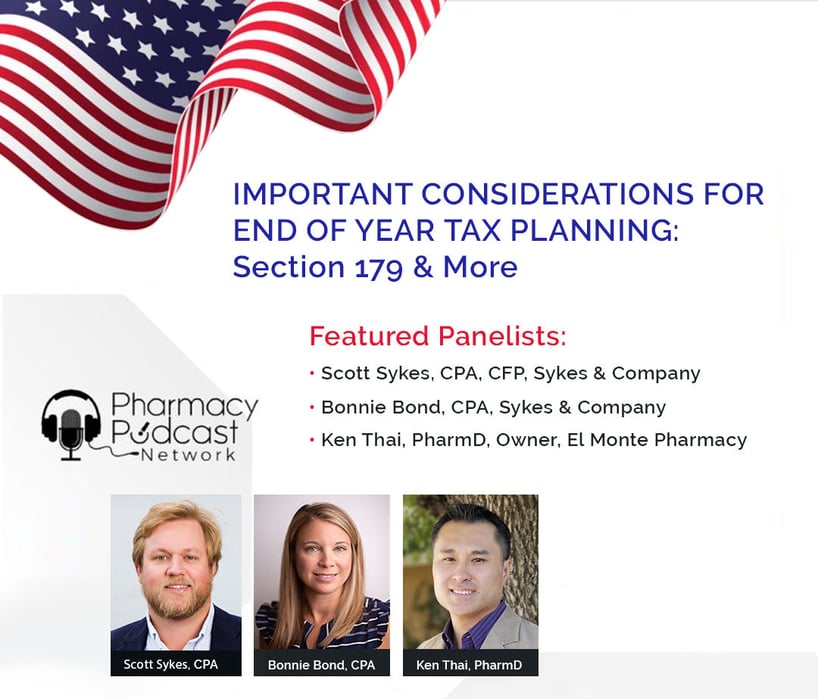 Ken Thai: I think that that's the key thing that I take away from it. And so, the tax incentives and the savings are just a bonus like a cherry or icing on top of the cake for me. I was able to deploy my staff to do other things including better patient care, better customer service instead of doing more mundane things like putting stuff like a bottle of medicine into another bottle. Things like that. I really feel that automation can really play a huge part in helping us to streamline our daily operation. It just makes the whole entire work environment better, too, because now they're doing things that are a lot more enjoyable, that much more meaningful.

"...And more important than the savings is featuring technology that can help you improve operations, efficiency, and the ability to improve the business as a whole. I think that probably is more important than even the tax savings, as far as I'm concerned..."          - Ken Thai, PharmD

Bonnie Bond: And if I could just add, because you bring up a great point. We're seeing so many of our clients that are dealing with staffing issues in their communities. With these robots and some of this technology, it could be more efficient and effective to have those things in place -- like you just mentioned -- it's fantastic. Some of your better employees can be moved to other areas of the pharmacy where they can be of more benefit. And so that's where technology is just huge that we're seeing in pharmacy these days.

Todd Eury:  What qualifies for Section 179? What equipment? Is it software? What about the depreciation and equipment? Give us the guidelines.

Scotty Sykes: I agree with Ken one hundred percent here. As pharmacies require more of their services outside of filling scripts, you need to add technology. You need to add these automation tools to your pharmacy equipment.  Take advantage of the tax law to do that while it's here. But for Section 179, software counts, computer equipment counts, robotics count, some improvements can count in that 100% write-off.

And when you start getting into some improvements, and even looking at your building, that's where Section 179 and bonus depreciation can play a huge tax planning role.

When you think in terms of a building. If you own a pharmacy building, let's say It's a $500,000 building,
you have to write that off over 39 years, which is a very long time. But if you do what they call a cost segregation study, for example. That takes that building and breaks it down into individual components: the cabinets, the plumbing, the electrical, the floors. And each of those individual components goes into these different depreciation buckets which then allow you to use Section 179 bonus appreciation to get a 100% write-off. And so, you can take a $500,000 building and depreciate it over thirty-nine years, and maybe you're able to depreciate $300,000 of that building in one year because it's falling into the buckets of Sec. 179 and Sec. 168 eligibility. So, you're talking huge tax savings if you own your building in your pharmacy, for example.

That's really where Sec. 179 is going to come into play. But again, really, all equipment is going to qualify.  Vehicles is a big one. Obviously, we hear about a lot. The IRS (actually, Congress) wants you to buy those heavy vehicles over six thousand pounds. The SUVs the trucks, the vans. Those will allow you for 100% write-off.

Are you considering making a significant investment in capital equipment for your pharmacy this year? It is not too late take advantage of Section 179's benefits before December 31st.

If you would like to learn more about Section 179, visit our page here and fill out the form. 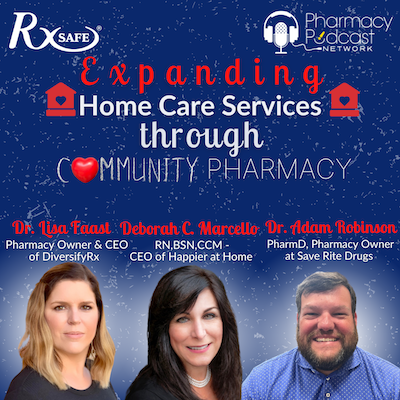 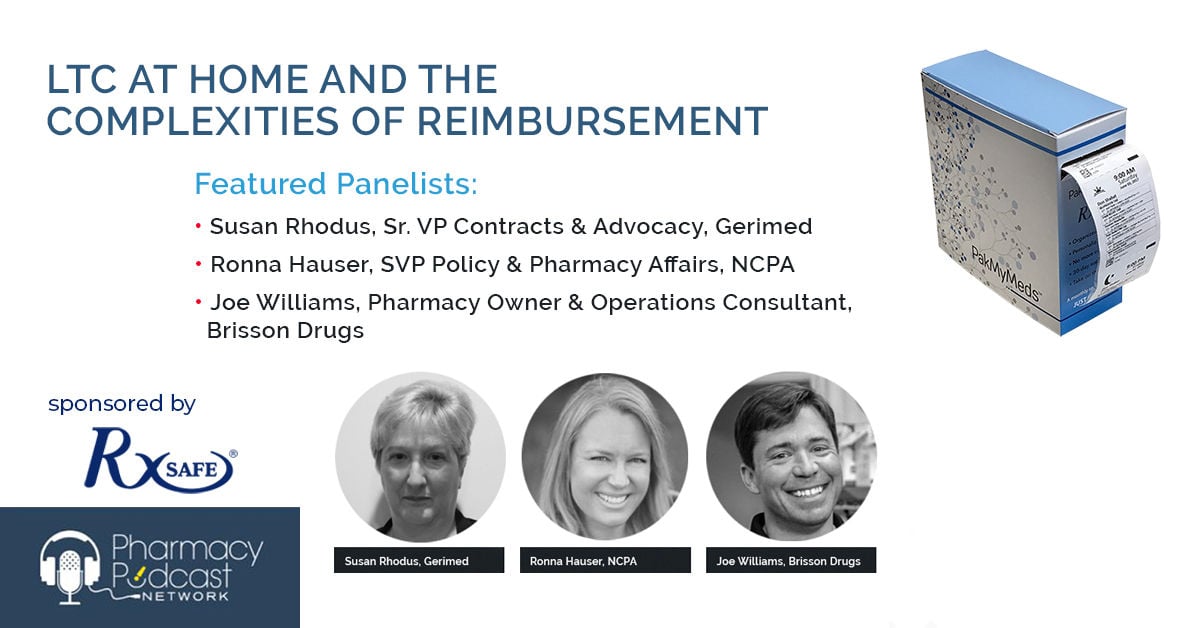 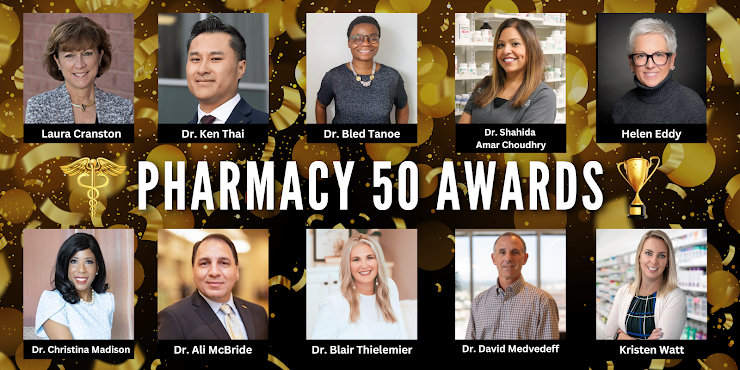